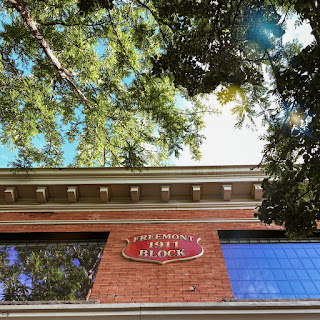 They say the world is a small place, but sometimes the reality of that statement hits you so hard and in such unexpected ways that you have to stop for a minute and take stock. Living in a small town (which has played host to my family for four generations in varying capacities), those six degrees of separation shrink to about two. It’s not even people sometimes; even a location can spark the wheels turning.

Small towns and their inevitably slow pace of change sometimes make the years and the scenery blur together so much that I don’t even notice them, but as I paused outside of one of Kamloops’ well-known eateries the other day with my friend D those six (or two) degrees got me thinking about how much *has* actually changed.

The Art We Are serves up lattés and lunches to a hungry artistic crowd, and their neighbour Botanical Scene is busy making everyone’s homes greener, but the building that houses these popular spots (The Freemont Block) has a history that traces its roots back to immigrant John Fre[e]mont Smith. This foursquare brick building was built by Smith in 1911 after he found success in… well literally everything. Alderman, shoemaker, prospector, businessman, Smith’s list of achievements could go on for days, but you all have access to Google, so I’ll let you discover more about him yourself!

My history with the Freemont Block starts circa the early/mid-1990s. By that time the building was occupied by the Camera House, another downtown staple, whose schtick was  - you guessed it - cameras and the accoutrement that goes with them. My dad was also a photographer and, in typical small town fashion, did business with the Camera House - so once and a while I was sent down the block from our West End home to see “uncle” Barry for more film for pops. Favourite memories: one of their employees, Brian, always talked like Donald Duck for us errand-girls; if Dad came with me, he could always be talked into a slice of cake at Swiss Pastry or a donut at Tim Horton’s down the block; and spending the pocket change dad paid me on 5-cent candies at Erwin’s!

The next chapter of this building’s personal connection came to me in high school, when I met my BFF, A. Over the years A and I have discovered that we shared a LOT of the same childhood hangouts, ranging from our brief time in a Catholic private school to being on rival soccer teams, and yet it took us until an art class in Grade 10 to actually be in the same place at the same time. There were Skittles involved this time around, so clearly it was meant to be. I don’t think we knew right away, but we later made the connection that her parent’s yoga and bellydance studio lived above the Camera House for a few years - just a few degrees of separation away.

A more recent late night stroll making sure that my original A bestie (yes, apparently I have a small A-squad) got back to her hotel safely revealed another connection to the brownstone. A (the First) spent most of her childhood in Kamloops, and may have ditched the Interior’s sagebrush for coastal surf, but she inevitably winds up back in good old Kamloops - at least for a time. On one of these sojourns she was working towards one of her many degrees, and needed a place to stay, and apparently the place of choice was a cool downtown loft. I heard the stories at the time of the XXL Christmas tree that toppled, wardrobe simplification techniques, and the boating adventures that are the only way to get through overheated Kamloops summers, but somehow I missed the fact that her exposed brick walls were none other than the familiar Freemont Block!

And that brings us back to today: standing on street corners, wondering what small bits of history lie hidden amongst the brownstone and bricks, while we wait for pastries. At this point, I don’t think that I could be surprised by any fewer degrees of separation with the world, but I still can’t help but wonder…